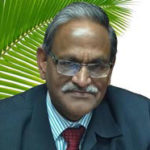 Dr. Ramesh Chandra Srivastava took over the charge of Vice-chancellor of this University on 22nd Jan, 2016. He was born on 1st July, 1956 at Allahabad and completed his school education in Allahabad. He obtained his graduation degree in Agricultural Engineering from Allahabad Agricultural Institute, Allahabad. He obtained Master’s and Ph.D degrees in Soil & Water Conservation Engineering during the year 1978 and 1993, respectively from Indian Institute of Technology, Kharagpur.

In addition, Dr. Srivastava has also made significant achievements, in his career, in formulating inter-disciplinary programmes (69) and mobilization of external funding for projects (over INR 2000 lakhs). He also contributed a lot in the infrastructure development of the institutions he served  – two KVKs, two outreach centres, 6 new laboratories and created many other facilities. Nine ICAR awards, 3 state awards, 5 DoAC (GoI) awards to farmers, 22 professional society recognitions, 5 Official Language Awards and many other awards received by the Institutions he served also signify his contribution in the overall development of the Institution.

Dr. Srivastava has vast experience also in establishing linkages with Public and Private, National and International  Institutions for effective implementation and conduct of the ongoing programmes. His views on various aspects can be viewed at http://concernedindianviews.blogspot.in/